I have been on almost all (90-95%) raw for the past week and all I can say is WOW! I feel amazing!  I really feel more connected to the natural environment/universe. As cheesy as that sounds it really is true. It’s like I’m living on a new level. I feel way more relaxed and happy than I normally do and I don’t get as irritated when my kids are being naughty (most of the day). Although I have started getting some detox symptoms last night. I had a really bad headache/nausea that started last night and then I woke up with one (this has never happened). The rare migraine headache I usually get is always gone by morning. Then I took a little turmeric powder mixed with honey and about 30 minutes later it was gone! Normally when I have a migraine they NEVER go away that quickly! It’s always a long drawn out process that usually requires Tylenol and a nap. I’m going to have to try the turmeric remedy next time I have a non detox headache to see if it will take it away that easily.

For breakfast I had a bowl of chia breakfast pudding and for lunch I had this  protein smoothie that I had yesterday with a kiwi fruit added to it. I intended on having the smoothie for a snack but it ended up keeping me full until dinner. Also when I say I had a smoothie it means I had about 2 or 3 large cups of that smoothie! One of these day I will learn portion control!

For dinner I made the same greek salad I have been making almost every day for the past week or so except with cranberries instead of raisins and hemp seeds on top. I think I am about greeked out! Maybe its time to move onto some new salads! For desert I made a cherry chocolate banana split.  I LOVE making ice cream using mostly just bananas! It is really hard to find an ice cream dish that isn’t loaded in some kind of fat! And you know how I feel about sugar and fat combined! (gall bladder enemies!) I used carob on top instead of chocolate tonight because it’s late and my kids need to actually sleep tonight. 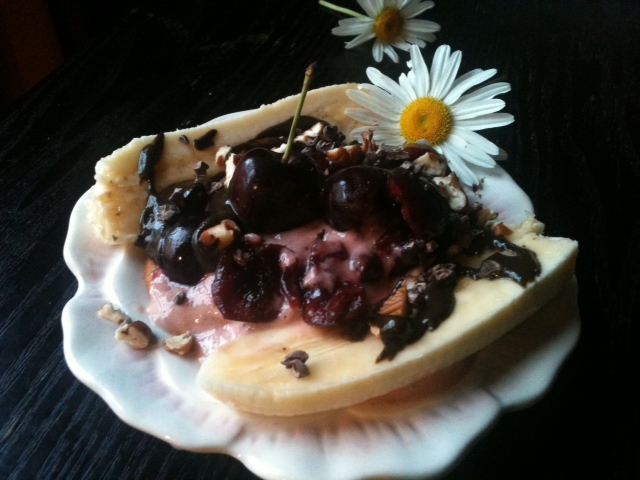 * Blend/process all the ingredients in the blender-you can add 1-2 tablespoons of nut milk to help it process easier but if you overdo it your ice cream will turn into a smoothie!